He wasn’t born into wealth, doesn’t own a sports car and he’s not a banker, he really doesn’t seem any different from you or I.

But what makes Robin’s story so interesting is that he’s retiring in the next 12-18 months aged just 31.

I recently interviewed Robin to pull out exactly how he’s retiring at 31. This is his story: 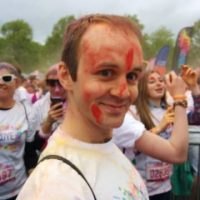 I grew up in Croydon, studied physics at York and then moved to Wuhu in China for three and a half years, where I did data analysis for a market research firm called ENF Ltd. Since 2013 I’ve been working in London, doing Data Visualisation.

Outside of FI, my interests are languages (Chinese and Spanish), making YouTube videos and running my Meetup group.

Recently I’ve started to get into the FI community in London following something I discovered on my sabbatical.

2. How Robin is retiring decades before the norm

SJ: Thanks Robin, so how exactly are you retiring so young?

My expenses have always been low, possibly something to do with the Scottish blood on my mother’s side, who knows. In any case there’s only so far one can lower expenses, after that it’s all about maximising income and ROI on savings.

SJ: Could you give our readers some details into your side hustles?

Sure, these range from putting rooms on Airbnb, paid Meetups, Bitcoin, YouTube, renting my parking space and recently matched betting.

SJ: Interesting, Paid meetups, could you expand on this?

My regular meetup is a free language exchange. My paid event (£3) was language exchange meets speed dating, where I would give people a seating plan and move them around every half-hour, the focus being on language learning though.

It worked really well and people really got value from it. It made about £75 profit each time.

SJ: You also mentioned Matched Betting? What is this?

Matched betting is where you make two equal bets with two different providers, mathematically you loose a small amount. However you earn money from the bookies offering free bets/incentives to sign up.

It’s starting to get more popular as the marketplace becomes more competitive and there’s certainly money to be made – one blogger is now making over £4k a month.

3. What got Robin started on this path?

SJ: So what got you started down this journey?

I read Rich Dad Poor Dad in China and was psyched for about 6 months. I didn’t take much action until I got back from China in Dec 2012 though.

I suppose my biggest act was to focus intently only buying a house, which after being gazumped once, I succeeded in doing in Feb 2014.

I also dabbled in Bitcoin in 2013, buying it from Japan and reselling it through LocalBitcoins.com in London.

At that time there was a 10% markup on doing so because of the barriers to entry (the only real exchange was in Japan and you needed to do an international bank transfer in order to buy them!).

After I had my property, I started accumulating savings, at that stage I started looking for higher returns than the 1%. Got 3% in Santander until I maxed it out, then began looking for shares and P2P.

SJ: I admire your hustling! I love the arbitrage you found between the Japanese and London Bitcoin marketplace, how did you discover this? Do you think there is potential for other, similar opportunities?

I discovered it because I wanted to buy bitcoin and found it was 10% inflated in London vs the exchange in Japan.

This was before a proper exchange existed in London, all that existed in 2013 was something akin to eBay, where you’d do a bank transfer to some other user in London, and they would send you their Bitcoins.

Like any arbitrage, it existed because of scarcity; it took work to move bitcoin from one side of the world to the other and no one was willing to do it.

In this case, though, the “work” was just wire-transferring money. A purely psychological barrier.

I mention this because it seems likely to me that psychological barriers are becoming prominent in the world when compared to physical ones. (Early retirement and FI are good examples).

SJ: You also mentioned P2P investing and property how did this come about?

I got started in P2P because I wanted a high-interest savings account. I was (foolishly) wary of stocks because I thought we were in a bubble. I took a look at corporate bonds, but they all seemed to require longer term commitments and didn’t offer attractive enough returns.

I experimented with several P2P companies (Rebuilding Society, FundingKnight, BitJam) but Saving Stream was by far the best for return and simplicity.
Update (09/05/17): Following the interview Saving Stream rebranded to ‘Lendy – The Property Platform’.

I shifted some money into Zopa Plus (Robin will receive a small commission if you sign up through this link) later just to diversify a bit, and because Zopa’s platform was entirely automated.

As far as property goes, I would recommend buying your own place soon as you can, although granted it’s difficult now.

Mortgage rates are disgustingly low though, and getting access to cheap credit is something Rich Dad Poor Dad woke me up too. Like it or not, our society seems to run on the stuff.

4. How to calculate how much you need for retirement & why it’s less than you think

SJ: Fantastic, great work on making the most of that situation. So how did you figure out how much you needed for retirement?

The classic rule of thumb is 25x one’s annual spend, this is rephrasing of the Trinity Study which looked at the historical returns of stocks and bonds and calculated if you withdraw no more than 4%, your investment pot lasts infinitely.

It does assume the 25x annual spend is invested in stocks and bonds so you’ll have to be comfortable with this. However, the upside is you need far, far less than you think you might need to essentially eternally stop working.

As I’m comfortable with about £15k a year which means I should shoot for £375k.

However for a while, I’ve had the suspicion people tend to over-save, and that I could exit long before the £375k mark and still be ok.

I’m certain income from side hustles will only increase once I retire, and in the absolute worst case all I’d need to do would be to contract for a month to make up any shortfall.

My current target is £350k, it depends on how much I’m enjoying my job in a year’s time how much beyond that I go.

SJ: At what point did you realise retiring young was actually possible?

When I was 14 I knew I didn’t want to do a 9-5 all my life but assumed I needed to become a millionaire through business to avoid it.

2011 reading Rich Dad Poor Dad made it theoretically possible with much less.

2014 after buying a flat and putting it on Airbnb, I started to see a good return and it became more concretely possible.

SJ: What are the things (if any) you wish you did earlier?

Took more risks faster. Every time I took a risk (such as buying Bitcoin or shares) it felt scary. But after I’d done it, that level of risk became blasé to me and the bar was set higher.

I don’t mean be reckless, but edging out of my comfort zone at a faster pace would have been better.

SJ: A lot of people struggle with impulse spending which overtime can decimate financial goals – any advice?

Can’t help much as it’s not something I’ve ever suffered from, see Scottish mum above!

I have a sweet tooth though and I combat that by never having sweet things in the house, so perhaps remove the opportunity. Stop putting yourself in places where you can make impulse purchases.

SJ: What are the common mistakes you see people make when it comes to money?

In general terms: Emotional decisions over rational ones, with that in mind:

Paying off mortgages
You want to go the opposite way! I remortgage to take out a higher loan whenever possible. I don’t believe there’s any mathematical logic in paying off a 1.25% loan.

Phone contracts and insurance
2-year phone contracts, it’s like buying a car on credit, just don’t. A sim free phone will save you £100s. Taking insurance for anything other than catastrophic events, if you can insure yourself why would you pay someone else to do it?

SJ: Thanks, Robin, great advice. So, what are you planning to do once retired?

Learn things. One idea I was toying with was a YouTube channel documenting each learning journey, with viewers voting on the next project. Just an idea for now though, maybe in a few years.

SJ: Sounds like that will keep you busy, I’m sure many of our readers would love to also retire early. What advice could you offer?

Small things help but they only help a small amount
Focus on the big things. Negotiating a £10k discount on your house purchase or getting a better mortgage will outweigh all the small choices you make for years to come. 80\20 your effort.

Work overseas
Consider working abroad for a low salary to level up faster. I worked unpaid in China for 5 months, and then at £450 mth salary for the next year. I didn’t care because I was leveling up.

Utilise credit as much as possible
Look for cheap sources of it for example Mortgages give you hundreds of thousands of pounds at ~1.25% interest. I’d also suggest taking the maximum term (usually 35-40 years).

Or on the more riskier side 30-month interest-free credit card’s and overdrafts if utilised correctly can build wealth (assuming you can manage debt) for example an interest-free overdraft of £5k x 2.5 years invested in Zopa =~£850 of free money.

Side hustles
Anything with a barrier to entry creates a profit opportunity because other people don’t enter. But sometimes these barriers aren’t physical, they’re mental, so you can overcome them in an instant by changing your thoughts.

A simple example: Matched betting. You can use free bets and matched bets on betting sites to make hundreds of pounds with minimal risk and very little time.

But there’s a mental barrier in believing that it’s possible and actually doing it. So not everyone does it. So the opportunity remains.

Larger Example: Sending money to Japan to buy Bitcoin was a huge mental barrier for me, but after I’d done it I was only constrained by home much money I could send. For every £1 I sent I made 10% profit brokering it back to London.

Unfortunately, because it took me a while to overcome the barrier, the revenue stream only lasted a few months before everyone else caught up and the margin vanished.

SJ: Thanks Robin, there’s some brilliant insights here, I’m sure many of our readers will find this hugely valuable. Where can we find out more?

The best way is through my YouTube channel. Check it out for videos on Stoicism, Self Development, FI and Psychology.

Want The Key Takeaways & Action Steps From The interview? Download them here