Is a HUGE pension crisis heading to the UK?

Let me take you back in time, one hundred and ten years ago to 1908…

Edward the Seventh was King, the Suffragette movement was picking up steam and in August a revolutionary new law was passed introducing mass state pensions for the first time.

What I’ve not told you is that whilst the new pension started paying at age 70, you were only expected to live to 47 years old.

Over the next few decades the pension age bounced around, women were eventually granted pension rights and later in the Fifties and Sixties fueled by high inflation, stock market returns and interest rates employers began to offer final salary pension schemes.

By 1967 over 12 million UK residents enjoyed working for companies (private and state) that provided a final salary pension.

Rising costs, political scandals and the fact that the math simply doesn’t add up resulted in these schemes eventually being (almost) fazed out.

Which brings us back to today, late December 2018 a time when most current readers will have an auto-enrolment pension and assuming they’ll qualify forceast a state pension to kick in at age 70, currently paying £8,546 per annum.

But will they ever see this money? Or will it likely vastly different than today?

To answer this question it’s worth looking at…

The current economic state – will the big boss pay?

At a basic level, the idea behind a state pension is the working generations tax (National Insurance) pays the retired generations pension.

With the hope that when the current working generation retires, the generations below them then pay the tax to pay for their retirement and so on and so forth.

Still with me? Good!

The uneasy part is that since 1908 life expectancy has roughly doubled and the age at which the state pension pays out hasn’t actually increased by a single year, in fact, it’s actually gone down by five years to 652. 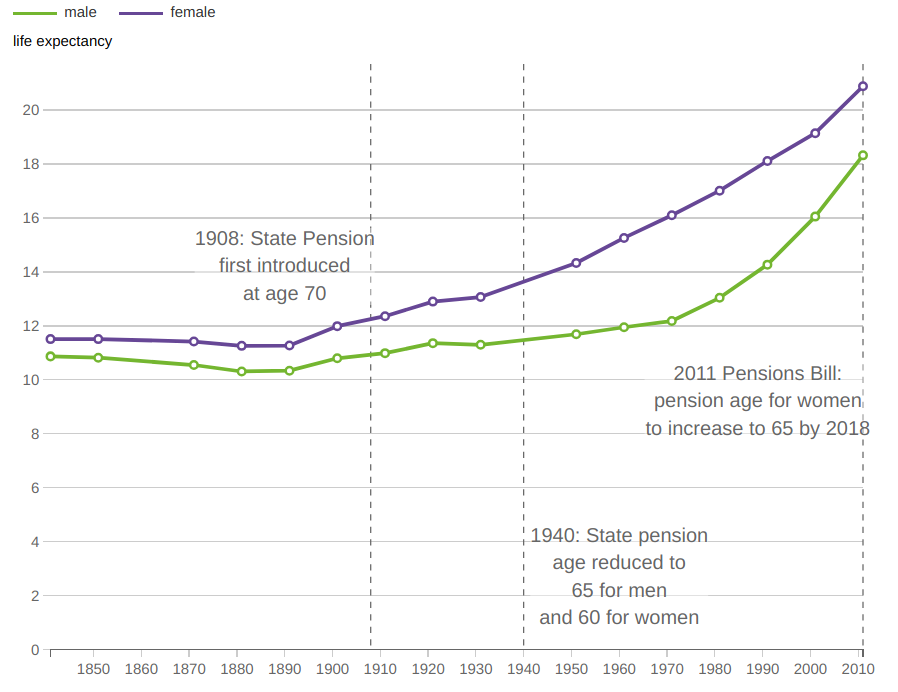 
As you can imagine this puts a lot more strain on existing taxpayers to support a greater amount of retired people.

Hang on pal! Hasn’t our general population also increased by 60%? Won’t this fix the problem?

The problem is not the total number of people in retirement but the ratio of workers (taxpayers) to retirees.

You see as long as there are 3 people working for every 1 retiree, the system can sustain itself.

Can you see how this might make the current system massively unsustainable?

In fact, haven’t we seen this somewhere before?

Pension crisis? That’s just for the state pension! What about my private pension, that’s different, right?

In a recent study of 6,000 pension schemes, a total of at least 600 are expected to become insolvent and 1 in 6 are at risk of being bailed out by the government created Pension Protection Fund.

Furthermore more in 2016, Hymans estimated up to a million people are at risk of seeing reductions to their pension benefits due to their schemes becoming unaffordable to the businesses providing them.

Remember how we spoke about final salary schemes earlier?

Well, partly thanks to these almost 1 in 10 companies in the FTSE 100 alone has a pension deficit to equity value of above 100%, meaning their pension liability is greater than their entire equity market value.

Furthermore, BT, IAG, Marks and Spencer and J Sainsbury each have pension liabilities worth almost double their market value!

But the governments loaded they can pay right?

To complete the trifecta of the pension time bomb at the same time as this has been going on the UK debt to GDP has started to spiral.

In the last ten years British Debt to GDB has increased 141% to 85.3%. Meaning the value of our national debt is the equivalent of 85.3% of the value of our entire yearly output (goods and services produced).

Note: It’s not about whether one political party is right or another is wrong it’s about taking responsibility for your own financial affairs.

Lets also not forget no modern politician has the balls to admit the problem, let alone take the steps required to rectify it.

Take the current for example, despite borrowing reducing dramatically: 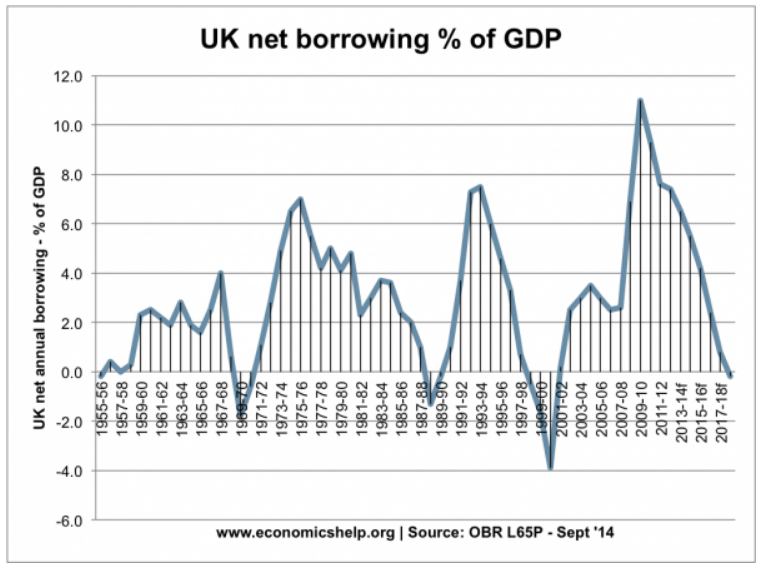 The impact of compounding interest on inherited debt: 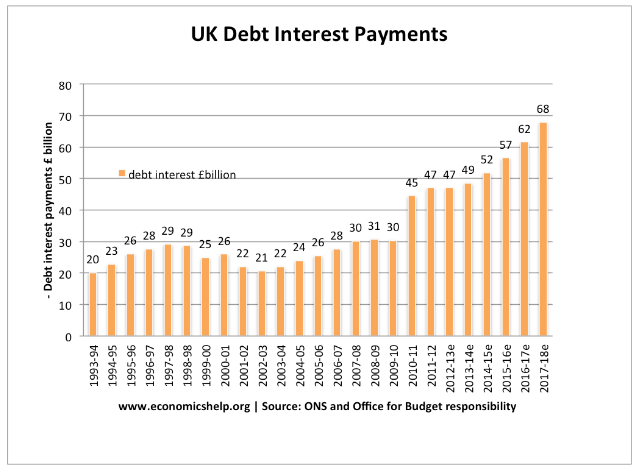 Far outweighs any current cutbacks that are being made:

Can you see why such huge debt interest payments are going to outweigh the changes made by whatever political party is in power?

So rather than fixing the thorny debt issue, underfunded pension schemes and stress on The Pension Protection Fund, governments hoping for re-election are going to have to choose from one or more of the following approaches:

I personally believe (my beliefs are mine, not yours so may differ from reality) they’ll likely do all six, with a particular emphasis on numbers 5 & 6 which will end up hurting Joe Public further since the impact of quantitive easing will be reduced purchasing power for pension payouts.

Number 5 may have also caught your eye! How likely is this?

History of indulging – why the government will likely raid your pension

As mentioned in How To Own The World this has already happened multiple times in historic and recent times.

Take Argentina for example, in 2008 they simply nationalised $30 billion of private pensions in a single stroke.

Or closer to home in 1997 when Gordon Brown changed the way pension dividends work resulting at least £100 billion being transferred by retirement funds into government coffers.

Or between 2006 and 2016 which has seen the lifetime allowance being reduced by almost 44% resulting in a tax gain to the government of 2000%.

The government in the UK and overseas literally have a history of raiding private pensions.

So far we’ve discovered the origin of the pension, why the current system for both state (and many private) pensions could be unstainable and why even if you do get your pension it may look vastly different to what it currently does.

So what’s left? Well how what are current retirees living off and how much will you need to retire?

How much are current retirees living off?

Traditionally retirees purchase Annuities upon retiring. This means trading a lump sum of money for a guaranteed lifetime income.

Most aim for an income two-thirds of their current salary, meaning an annual salary of £30,000 would see a reasonable yearly retirement income of £20,000.

The sticky issue is, is that the annuity rates (the % income you get from a lump sum) has been falling as interest rates have dropped. So many prior assumptions may have been made on now unreasonable figures. 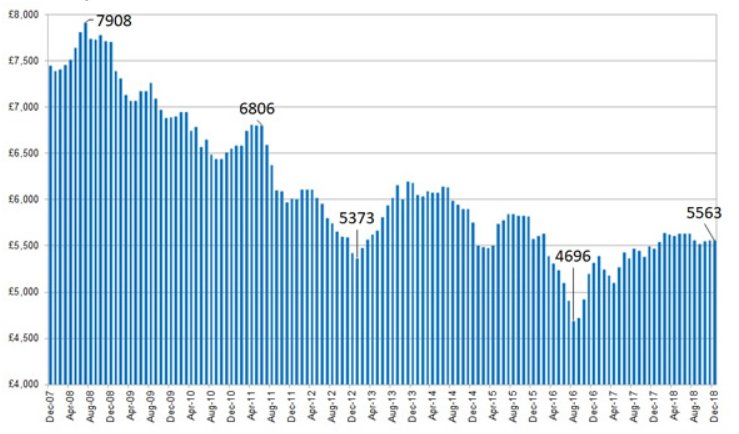 Thankfully love him or hate him George Osborne stunned the annuity industry when as chancellor he removed the compulsory need for pensioners to purchase an annuity.

This effectively freed retirees from a compulsory annuity purchase side-stepping the historically low annuity rate and giving the ability to pass down remaining pension balances through inheritance, rather than the balance staying with an annuity provider.

Massive thanks to Catherine Morgan (IFA specialising in financial coaching for women) for this insight.

Through flexi-access draw-down you could for example withdraw 4% per year giving you far more income. This is a very subjective amount for I would advise speaking to an IFA such as Catherine (mentioned above) to help determine the correct % for your situation.

So assuming a 4% withdraw rate and state pension eligibility you’d then need £286,330 to live off £20k per year. Far less than the £309k for an annuity paying the same amount but still a sizable amount of money for most.

So how much do most retire on? According to The Property Hub only 4% have more than £125,000, meaning most current retirees are likely living off small amounts, propped up by additional savings/investments and are heavily reliant on state pensions, which as we previously saw may not be an option in the future.

Furthermore Andrew Craig in How To Own The World cites only 50% of the current population even have a private pension, even lower is the self employed where just 18% pay into a private pension (cited by Jasper from PensionBee at UK Money Bloggers conference.

Meaning half of all adults and 82% of the self employed are planning on being totally reliant on the state pension scheme being around 30+ years from now.

So how much might you require for your future?

So to be able to purchase the same amount of goods in forty years that £20k would get you today, you’d actually need £65,241 per year (based on 3% inflation), rather than 20k.

Failing to adjust for inflation is a common deadly mistake.

To obtain this amount in income at the example drawdown rates referenced earlier (4%) you’d need a pension pot of £1,631,0255.

You might be starting to realise friends who hope to enjoy government pensions through working as teachers, nurses or civil Servants have some huge seven figure advantages you don’t! They may not earn as much now, but you better hope they’ll be the ones buying the round in forty years time!

Hang on! I’ve got an auto-enrolment pension!

I first came across these when working in Australia who has had companies paying in at least 9% matched contributions into pensions for decades, meaning employees enjoy 18% of their salary heading into a pension each year.

This has been going on for decades and actually rises to 10% (or a total of 20%) in the future.

Finally rolled out in the UK over a number of years, auto-enrollment pension schemes act similar to the Australian ‘Super’ by forcing employers to auto-enroll (you may opt-out) employees into pension schemes by deducting a % of their salary which the employer matches.

The auto-enrolment minimum is currently 5% of which at least 2% must be paid by the employer (72% less than in Australia).

The problem is it’s simply too little, too late.

Remember our 25yr old who wants to be able to have a retire on the equivalent of 20k at 65? If you were really paying attention in our example withdrawal of 4% you’d also remember he’d need a pension pot of £1.63m to secure this income.

Now let’s also assume his pension fund aims for an average return of 4% per year and his salary and contributions also increase each year by 3%.

Whilst this sounds like a boatload of dosh (and it is!) unfortunately it’s also 65.7% less than he’d need for the target income of £20k per year.

In fact, based on the assumptions above it would only provide the purchasing power of £6,822 per year or just £568.5 per month6. Could you live off this?

Can you see why you owe it to your future self to get interested in this?

So how much will you need to retire?

What small changes can you make now which will result in a bigger retirement income? And…

What recent changes have been made that you can use to protect your pension?

All of the above and more will be answered in our next blog post, enter your email in the box below to be notified as soon as it lands… 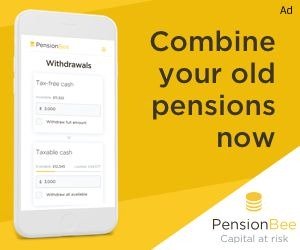