Are Train Companies Fleecing Us? Cost Analysis – Driving Vs Trains

On a cold February morning in 1993, the final days of the public run rail system were upon us. A new era of a private rail promised commuters a higher quality of travel, more frequent trains and even cheaper tickets.

Sir John MacGregor (then transport secretary) stood up in parliament that morning, looked across the crowd and stated: ‘I see no reason why fares should increase faster under the new system than they do under the present nationalised industry structure, In many cases, they will be more flexible and will be reduced.’

18 years later and 1000’s of us wake up every day to squeeze into overcrowded trains, with many on prime train lines paying up to £1 a minute for the privilege.

But is the alternative of sitting frustrated in traffic any better, let alone cheaper?

A cost breakdown – Car Vs Trains

On the X axis we have listed each journey whilst on the Y axis we have a measure of cost (the higher up the more expensive) Overlayed on the graph is three lines, blue for the cost of driving (fuel), red for off-peak train tickets and orange for peak hour tickets.

It’s pretty clear peak hour trains (in orange) are far higher in cost compared to both off-peak tickets and driving.

When comparing fuel alone, driving is cheaper than peak train tickets 100% of the time and against off-peak train travel tickets 87.5% of the time. Much more than expected – an average difference of £71 per journey.

Regular car users will be savvy enough to know that driving costs you far more than just fuel. Car depreciation, new tyres, MOT’s and maintenance all cost per mile.

But how do we account for this? Since every car has a different level of costs the best we can do is look to HMRC guidelines for allowable expenses for driving per mile. This isn’t 100% since the £0.45p allowance per mile is either incredibly generous or incredibly unfair depending on the value of the car you drive.

Let’s add this back to our graph…

Cost of traveling by transport type including claimable allowance 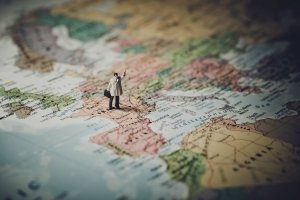 If driving is generally cheaper than taking the train during commuting hours why aren’t train tickets cheaper to encourage less cars on the road, reducing traffic and pollution?

In order to compare we took train tickets cost against to salary as a benchmark.

TUC go on further to say:

“In France, the latest figures released by the Campaign for Better Transport (CBT) show the annual cost of the commute from Ballancourt-sur-Essonne to Paris is just £750.

And in Italy, passengers making the journey between Velletri and Rome – which is about the same 23-mile distance – pay £442 for the year.

But commuters traveling the same distance from Wokingham into London Waterloo face a £3,248 bill.”

Even more extreme is a Swindon resident buying a season ticket to London, who faces a bill of £8,740.2 Which on a salary of £35,000 would mean working almost half a year just to pay for the train ticket!

The hidden cost of your train ticket – privatisation?

So why are European trains so much cheaper than the UK? Part of the reason is that they are typically public owned as was the UK in 1947-1993.

By being publicly owned the European governments subsidise the train tickets to ensure commuters pay an affordable fare.

Despite trains being privately owned in the UK, the Government actually still owns all the infrastructure (train stations, tickets, train tracks, signalling etc) who then charge train companies to use them. In fact it is indeed the UK government who also sets price rises on all regulated train tickets.

If you’re anything like me you’re wondering why the government still own the infrastructure but charge train companies to use it, yet set regulated ticket prices themselves?

Previously the infrastructure was also a private company called Railtrack. However, after a horrific train crash4, the company ended up in a financial mess and with a rail network at standstill. So the government stepped in to provide funding to cover costs.

Instead of this all going on repairs/compensation it was used to pay a dividend to shareholders of £137 million (you couldn’t make it up!), shortly after Railtrack was ‘acquired’ by the publicly owned new Network Rail for £500 million (meaning the UK government took control of the infrastructure again).

This is how we ended up with today’s ‘franchise system’ costing the UK government around £4.8 billion a year5 which after inflation is actually £1.2 billion more than the rail network cost when it was still a fully public organisation6..

Whilst the extra £1.2 billion has likely resulted in more trains, more passengers, and higher passenger satisfaction7 (although all three are disputed by pro-nationalisation groups such as Action For Rail8) it does seem somewhat ironic that privatising the railway system has resulted in costing the government and taxpayer 25% more and incurred train tickets often over 200% more than they cost in the national system.9

So if the government set the train tickets prices (like in Europe) why are they so expensive? 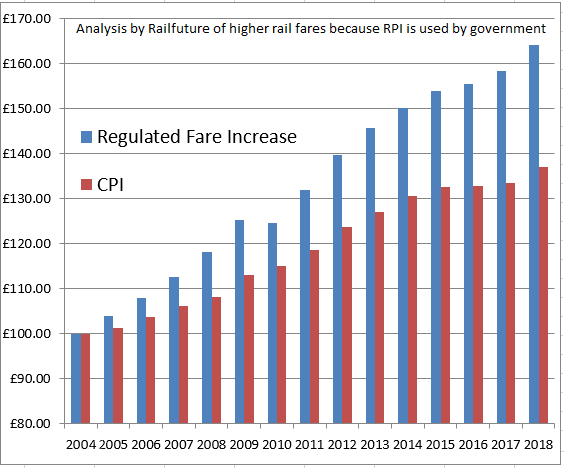 The main issue with regulated UK train fares being expensive compared to driving is because the price of tickets has nothing to do with the comparable cost of driving – the government simply doesn’t take this into account, instead they price them against inappropriate inflation figures.

There are two types of ticket prices in the UK – ‘regulated’ fares which are prices controlled by the government using inflation consisting of Season Tickets & most return tickets.1011 vs 4.1%12).

Meaning your train ticket is likely rising faster than your salary.

The difference in the two inflation measures mainly comes from RPI being calculated using a different calculation than CPI.13

Rail champion Railfuture rightly point out tickets should be based on CPI, not RPI and by not using CPI, rail fares have become 17% higher than they would under the CPI measure.14 Furthermore, during several periods since the railway became private, the government have actually increased rail fares each year by RPI+3% – essentially doubling the cost against inflation.

At the same time wage growth has dropped 15 and fuel duty has been frozen, whilst train fares have risen by more than 30%, twice the level at which wages have increased.15

This has created a huge disparity between wages, fuel and train tickets and we’ve all noticed the difference.

The upside of train travel is that it often allows us to arrive at our destination faster and with less stress (if you’re travelling outside peak hours!).

Yet with a rising interest in city traffic levels, pollution and the rush hour crush on many popular train routes, the government should consider stepping away from pricing train tickets against inappropriate levels of inflation and instead base them on the measure the average commuter compares them against – the cost of driving.

A spokesperson for the Rail Delivery Group told Money Nest:

‘The train companies, working together in partnership, are constantly carrying out research to develop new products that make travel easier, and better value for money for its customers.

Railcards help customers save 1/3 on most rail fares in Britain. We currently have the following Railcards in circulation: 16-25, Family & Friends, Two Together, Senior, Disabled Persons Railcards and Network Railcard. We’re also currently trialling a 26-30 Railcard on Greater Anglia.

There are also Regional Railcards. Regional Railcards are generally valid for local travel across a specified area of the network and may be offered by individual train companies or facilitated by local schemes.

If you commute or travel regularly during the morning peak times you could save more money with a season ticket. The Annual Season ticket offers 52 weeks travel for the price of 40 weeks.’

1. UK commuters spend up to 6 times as much of their salary on rail fares as other European passengers, TUC.

6. Before privatisation, the annual cost was £2.17 billion in today’s money that’s just under £3.6 billion.

9. Have train fares gone up or down since British Rail?, Tom de Castella, BBC.

10. There seems to be an argument about what is or isn't a 'regulated fare' with no concrete answer available, so they may be a slight difference. If you can find one please let me know.

17. As mentioned in RDG's comment a variety of different train pricing such as off-peak, on-peak, super saver, super off-peak savers, season tickets are available plus a range of railcards which may or may not be able to be used in peak times can be used to further reduce the cost of train travel